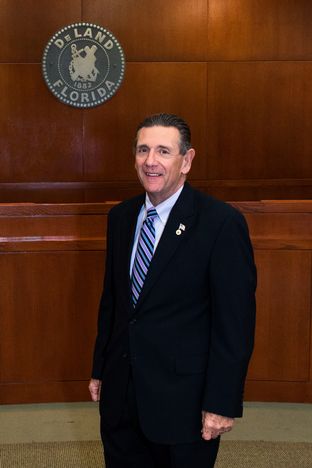 Robert F. “Bob” Apgar has been a resident of DeLand since 1959.  He has served his community as an elected official for over 29 years.  He is a shining example of leadership, citizen involvement, community spirit, and civic responsibility.

Bob Apgar’s service as a City Commissioner began in May of 1983 when he served two 4-year terms.  He was elected again as City Commissioner in October of 1996 and served until June of 2001 when he resigned his position to run for Mayor.  He was elected as Mayor in October of 2001 and then reelected in 2005 and 2010 without opposition. In 2014, he was reelected to his fourth term as Mayor.

During Bob Apgar’s tenure as Mayor, the City of DeLand has endured the most difficult issues a growing city can face, including numerous complex land development issues, a changing workforce, changes in the makeup of the community, and balancing a city budget with diminishing revenue while trying to limit any loss of city services.  Those who have worked with the Mayor in dealing with these difficult issues would describe him as a man of integrity, as his actions are always honest and straightforward.  He adheres to the highest ethical standards. For these reasons, he has strong creditability with citizens and other elected officials in Volusia County and the state.  In August of 2009, the Florida League of Cities awarded him its highest award, the E. Harris Drew Lifetime Achievement Award.

Bob Apgar is a 1965 graduate of DeLand High School.  He earned a Bachelor of Arts in psychology from Davidson College, Davidson, North Carolina in 1969.  He earned his law degree at the University Of Florida College Of Law in 1971.

Past and Present Community Involvement

Bob Apgar has been a resident of DeLand for over 50 years.  He is married to Teresa Apgar and they have three children and seven grandchildren.  In his spare time he enjoys reading, traveling, watching sports and just being a grandparent.

Under Mayor Apgar’s leadership, the City has gained a reputation throughout the state as a quality City that strives to be innovative and successful.  He has helped to ensure DeLand maintains its small town charm while achieving Henry DeLand’s vision for DeLand as the “Athens of Florida.”