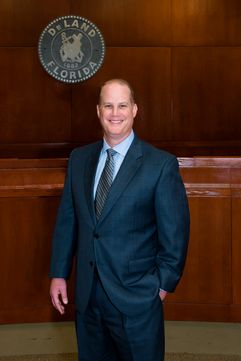 Michael Pleus is a native Floridian, born in Windermere, Florida.  He received his BA from Stetson in Political Science in 1994 and MBA from Stetson in 1999.  He earned his designation as a Credentialed Manager by the International City/County Management Association in 2008.  He is also a graduate of Leadership DeLand – 2001

His career in Public Administration began in 1994 as an Intern in the County Manager’s Office.  He was promoted to Special Projects Coordinator and later an Assistant to the County Manager before leaving in early 2000.  Michael was hired as Administrative Services Director for the DeLand in March of 2000.  He was promoted to Assistant City Manager in 2001 and City Manager in July 2008.  As City Manager, Michael is responsible for the day to day operations of City government.

Michael currently serves as a President-Elect for the Florida City/County Management Association, Executive Board Director for Team Volusia Economic Development Corporation and serves on the Leadership Committee for the Center for Performance Measurement for the International City/County Management Association.  He is also the Cubmaster for Cub Scout Pack 610, School Board Member for St. Peter Catholic School and is Past-President of the Kiwanis Club of DeLand.