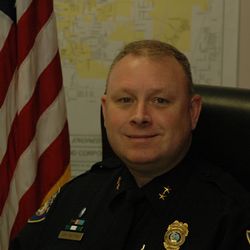 Deputy Chief Gary Batten started his career with the DeLand Police Department in 1995 serving the community as a patrol office before being assigned to the Criminal Investigation Division.~ After gaining experience as a narcotics detective investigating drug and vice related crimes, Deputy Chief Batten was promoted to the rank of patrol sergeant in 2001 and shortly after assigned to the Office of Professional Standards.  While assigned to the Office of Professional Standards, he managed the internal investigations function as well as the agency’s accreditation process.~ Deputy Chief Batten is also an assessor for the Commission for Florida Law Enforcement Accreditation. As an assessor he is asked to conduct on-site visits to other police agencies throughout Florida to ensure they are in compliance with mandatory standards.~ In 2007 he was promoted to the rank of lieutenant and worked as a platoon commander until his recent promotion to deputy chief of operations, responsible for the department’s patrol function.

Deputy Chief Batten is a graduate of the 239th Session of the prestigious FBI National Academy and holds an AA Degree from Warner University and a BA degree in Legal Studies/Pre-Law.  He is currently continuing his education at the graduate level.~ Deputy Chief Batten advocates a community policing philosophy which provides an organizational strategy that challenges police officers to solve community problems in new ways.